The research mainly focuses on:

Current research is financially supported by:

Functional foods have gained escalating importance on both scientific and commercial platforms due to the increasing demand of the health-conscious consumers. In food industry, fructans have the largest market share among the natural functional food additives. Especially inulin and inulin-type fructans stand out as the best known and widely used natural fructan additives due to their well established prebiotic, anticancer, antioxidant, antipathogenic and immunostimulatory activities. On the other hand, levan-type fructans are being consumed as functional food in various cultures and are mainly associated with high value food applications such as increasing the shelf life of food, bread quality and dough rheology, as edible food packaging and antipathogenic sweetener. In particular, several recent reports point to the superiority of levan-type fructans when compared to inulin-type fructans and hence there has been an elevated interest in developing levan-based functional food additives.

Considering the increasing demand on the functional foods, need for a such food components produced from our national resources as well as the high potential of levan in food related applications, studies were initiated to synthesize levan-based olgofructans (oligofructoses and fructooligosaccharides (FOS)) from levan by Halomonas smyrnensis AAD6T that is being produced as a national product within the scope of project 114M239 and its bifidogenic and antipathogenic effects were proven with previous studies. The main aim of the proposed project is to elucidate the true potential of levan and levan-type oligofructans as functional food ingredients in food-related applications. For this purpose, firstly, levan will be produced by large-scale bioreactor cultures and the purified polymer will be subjected to acid hydrolysis to produce oligofructoses at expected structural and functional properties. At the same time, FOS will also be synthesized with wild type and recombinant levansucrase enzymes and all the fructans produced within the scope of this project will be subjected to detailed food tests in order to relate their functional features to their structures.

Second part of the project will involve food applications, where the “Flour and Bakery Products” was chosen as a model sector since it covers majority of food companies. Main goal of this part will be to bake breads from fructan containing doughs and analyze the functional properties of these breads by means of comprehensive food tests. For this, rheological properties of doughs will be used to decide on the composition of fructan - flour mixtures which in turn will be used to bake bread prototypes. Whereas small scale baking trials will be executed in Pakmaya Aegean Region R&D plants, large scale baking trials will be performed at the Lüleburgaz Baking Factory. Weight, volume, crust properties, water retention, textural, chemical and microbiological properties of the prototypes will be analyzed and results will establish the antimicrobial and shelf life extending properties of the fructans that in turn will show their potential to be used as functional food ingredients. The most important outcome of the project will be the levan and levan-type oligofructans that will not only be produced as a national product but also be associated with food-related applications as a functional ingredient. The novelty of the proposed project is that it involves for the first time, the production of national fructan based functional food ingredients as well as their application in food sector. Moreover, due to the novelty of the planned studies, project outcomes will have a high impact in literature. Project outcomes will be presented in national and international conferences and workshops, at both academic and industrial platforms and they will be published in respected journals. Finally, students will gain extensive knowledge on fructans and functional foods by conducting their thesis work within the scope of this project and this project will definitely open the gate for new project ideas.

Details:
Levan is a fructose homopolysaccharide that is produced by a variety of microorganisms in sucrose-based media. It has many outstanding properties like high solubility in oil and water, strong adhesivity, good biocompatibility and film-forming ability. In fact, a recent literature analysis on microbial exopolysaccharides attributed levan together with xanthan, curdlan and pullulan as the most promising polysaccharides for various industrial sectors hence levan has a high commercialization potential. Moreover, there is a growing body of interest in research associated with levan and its applications. Levan is not only consumed as a functional food in Japan and Korea but also used as a natural ingredient in commercial personal care products. It is microbially produced in Switzerland, Germany, England, China, Korea, Japan and USA using mesophiles at very high production costs. Hence development of novel microbial production processes for levan holds great industrial importance.

Recently, halophilic bacterium Halomonas smyrnensis AAD6T has been reported as a high-level levan producer extremophile for the first time by our research group. Using both conventional and systems based approaches, production yields in semi-chemical media were substantially improved. Further research on the potential use of levan by Halomonas sp. as a bioflocculating agent, its suitability for peptide and protein based drug nanocarrier systems, its thin films deposited by laser technologies, levan-based adhesive surfaces obtained by Layer-by-layer (LbL) technology and comprehensive characterization of its ternary composites were reported. Moreover, preliminary studies on using various biomass resources as low-cost substrates were initiated and whereas uses of cheese whey powder, olive mill waste water, sugar beet pulp, orange bagasse and carob as substitutes for sucrose resulted in very low polymer yields, use of sugar beet and starch molasses improved the production yields with concomitant reduction in production costs. Further reduction in costs was achieved by using the sucrose containing sugary wastes of the University Dining Hall and replacing distilled water with tap water.

A halophilic microbial producer provides important advantages over a mesophilic producer by eliminating the risk of contamination as well as the energy and time needed for sterilization and hence decreasing the production costs and increasing the potential for its commercialization. Considering this fact and the promising results obtained from the preliminary studies, our research activities were focused on developing strategies for reducing the production costs via systematic approaches. Hence the ultimate goal of this project is to develop a low-cost and industrially sound microbial bioreactor production process for levan polysaccharide. To achieve this goal, studies were initiated to find suitable industrial wastes and consequently, sucrose-based wastes of the process line obtained from Güllüoğlu Food Company, Natural Salt samples obtained from companies located in Erzincan and Eskişehir as well as low-cost substitutes for boric acid are currently being analyzed for their potential use in the production. The companies confirmed their sustainable supply of these wastes for the project. Within the scope of the project, the microbial production conditions utilizing these wastes will be optimized using shaking cultures. Then, process conditions will be optimized using small scale and then large scale fermenters. The produced levan polysaccharide will be subjected to chemical and biological characterization for ensuring its structural integrity and biocompatibility. Then, the procedures for obtaining the international patent of the production process will be initiated and the process as well as the levan polymer as the value added product will be introduced to several industrial sectors in Turkey. Hence the technical know-how gained in this project will have important impacts not only on scientific communities and industries specialized in microbial polysaccharides but also on areas associated with their applications in medical, chemical, pharmaceutical and biotechnological sectors.

The most important outcome of the project will be the sustainable and economical production of levan biopolymer using the halophilic producer isolated from Turkey. Moreover, the industrial wastes will not only be converted into a value-added product but also find new areas for their reuse. Project outcomes will be presented in national and international conferences and workshops and they will be published in respected journals. Finally, students will gain extensive knowledge on microbial polymer production by conducting their thesis work within the scope of this project and this project will definitely open the gate for new project ideas. 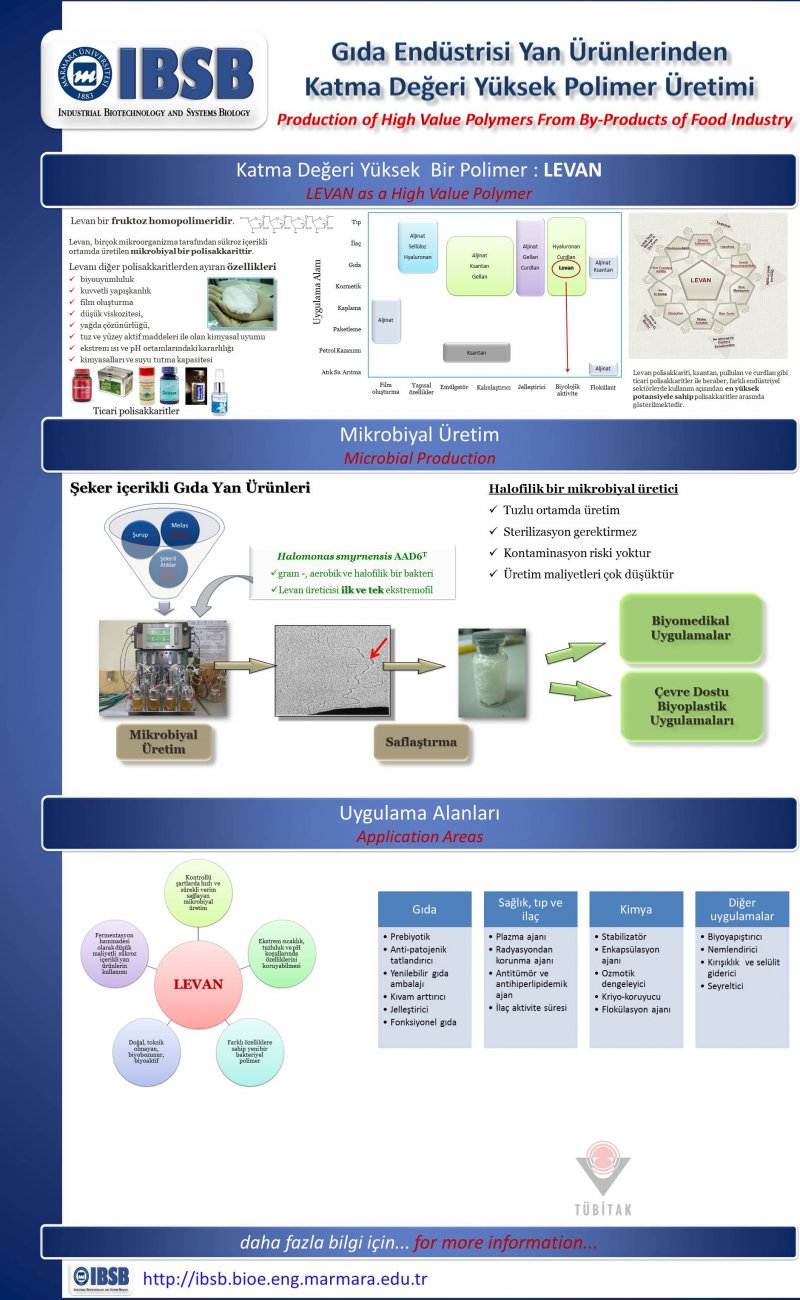